Home » How to Overcome Bad Habits

How to Overcome Bad Habits 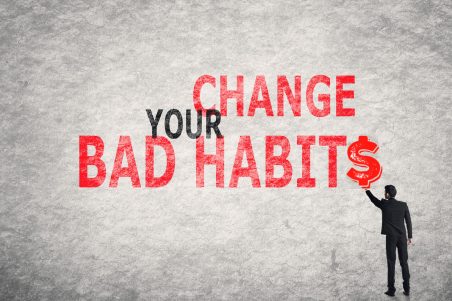 Creating habits allows our brains to devote less energy or pay less attention to routine behavior so we can devote that energy to more complicated tasks or learning new information. In other words, forming the right habits makes life a lot easier and allows us to grow.

Of course, we all have bad habits we’d like to quit – some more detrimental than others. For instance, while biting your nails might be a minor inconvenience to hygiene, repetitive behaviors such as compulsive gambling or binge shopping can cost you everything. Even impulse buys can have a snowball effect on your finances.

Here, we’re going to discuss habits according to Charles Duhigg, the author of “The Power of Habit”, and how it’s possible to break behaviors that may lead to debt.

The Framework for Changing Habits

While there is no single solution that will work for everyone, Duhigg states there is a framework that can be used to identify and change almost any habit. The process begins with identifying the routine or behavior you want to change and then requires you to experiment with rewards, isolate the cue, and have a plan.

According to scientific studies conducted by MIT researchers, habits, even the most deep-seated, are the expression of basic neurological loops that consist of a cue, a routine, and a reward. This cycle is a habit loop.

To change a bad habit, start by identifying the routine or the behavior itself, the most obvious part of the loop. If you’re struggling with debt, for example, ask yourself if there are specific repeat behaviors that may have contributed to your financial woes.

Here’s where the real work begins. To break an undesirable habit, you have to shake up the routine by playing around with different rewards. Ask how does the behavior satisfy your needs? What are you getting out of it?

For example, perhaps you find yourself frequenting Target more than your budget can handle and you’ve now racked up a pretty hefty credit card balance. Instead of going to Target, go for a walk or grab a cup of coffee with friends instead. The activity itself doesn’t matter. The goal is to test various rewards to see if you really want to shop or if you’re trying to satisfy another craving entirely.

We receive more information than we can process sometimes, making our triggers difficult to identify. To make it easier to weed out these signals, try focusing on these five questions instead:

Answer these questions every day before you commit the habit and you’ll soon be able to recognize a pattern. For example, while all other answers vary, you might discover your emotional state was consistently bored, making you realize your shopping excursions were an attempt to relieve boredom.

Once you’ve established a pattern, it’s time to make a plan. This step requires more than just putting up sticky notes reminding you not to do something. Instead, you’ll have to list specific actions that will replace your old behaviors.

For the bored individual that turns to shopping for stimulation, for example, socializing might be an equally satisfying event. Specifically, when they are bored they might meet a friend for coffee instead.

Most of us are already aware of the harmful behaviors we’d like to change. The challenge is identifying what instigates that action, how we benefit from it, and then creating a plan to change the cycle. And though the solutions vary, this framework remains the same – whether you’re a nail biter, binge eater, or compulsive shopper.

Of course, debt requires more than changing the habits that caused it. The creditors still demand their dues. Unfortunately, many are burdened by credit card balances that would take them a lifetime to pay off. If you can’t afford to pay the monthly minimum or to pay at all, debt settlement offers a fast, ethical way to regain control over your finances.

To learn more, please contact New Era Debt Solutions or fill out the form on this page for your free debt analysis.