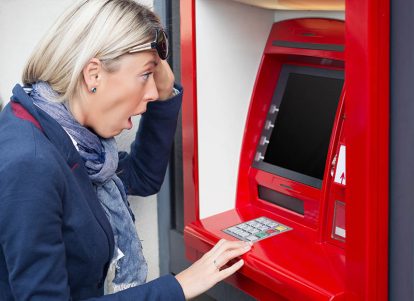 If you have a negative bank account balance, then this means that more money was taken out of the account than was available. Also known as an overdraft, a negative account balance can occur when a transaction against the account takes its overall balance below zero. Dropping a bank account’s balance into the red can be quite costly as many financial institutions implement steep fines for those who overdraft their available funds.

Negative balances can happen for a wide variety of reasons. Most of the time, overdrafts happen on accident because of unfortunate timing, but they can also be a symptom of a much larger financial issue that needs to be addressed.

For a negative account balance to occur, your account balance may not have updated immediately after a check was deposited or you may have forgotten the exact balance which was available in the account before making a purchase. ATM transactions, writing a check, withdrawing from a bank teller, and the billing of scheduled monthly payments are some of the most common reasons why overdafts occur.

When your bank account balance falls into the red, one of the three scenarios is most likely to play out.

Banks don’t tend to allow accounst with a negative balance to stay open indefinitely. If you’ve overdrawn from your account too many times or have let the account balance stay in the red for too long, the bank will most likely close the account. If the bank does close your account because of a negative balance, this action is reported as an involuntary account closure to one of the companies that keeps records on checking accounts. This can make it much harder to open a new bank account for years afterward as any records of such closures in your banking history are kept on your record for up to 7 years. Additionally, the debt owed from the negative balance does not simply disappear, and the bank will likely try to recover the debt through a debt collection firm or other method.

Can You Close a Bank Account with a Negative Balance?

When trying to close a bank account with a negative account balance, the bank can either accept or refuse. If the closure is denied, they will ask that you pay back the balance before the account can be fully closed. If they accept, the debt may be sold to a collection agency and this can have a negative effect on your credit score. In addition, the involuntary closure will be listed on your bank account history, potentially making it much harder to open an account without severe restrictions on it in the years after the closure.

The first thing you should do if you’ve overdrawn an account is to stop making purchases with that account. This includes stopping any automatic payments that may be tied to the overdrawn account. From there, you should get an understanding of how much has been overdrawn and the cost of any fees that may have accrued as a result. You can take these steps to figure out exactly how much could be owed for the negative balance:

Next, it’s a matter of paying enough into the account to reverse the negative balance and all of the fees.