Home » New World Economics: How the Pilgrims Financed Their Journey

New World Economics: How the Pilgrims Financed Their Journey 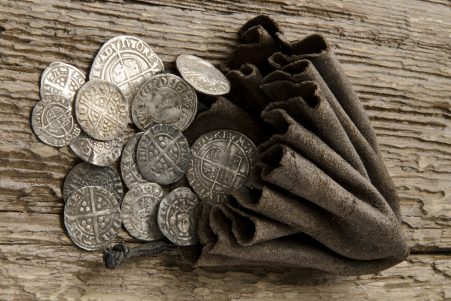 Why Did the Pilgrims Come to the New World?

On September 6th of 1620, to flee religious persecution and maintain their English cultural identity, a group of separatists dubbed, the Pilgrims, boarded the Mayflower to sail across the Atlantic to establish a free colony in the New World.

And just as one needs capital in the modern day to build a home or buy a new car, the Pilgrims needed money to finance their voyage to the Americas – an oft omitted fact in grade school textbooks (wouldn’t want to taint the idealism of liberty with capitalist pragmatism).

To finance their freedom, the Pilgrims turned to the Merchant Adventurers, a group of wealthy businessmen who agreed to pool their money to create a joint-stock company with the expectation of making a vast profit as the colony established bountiful trade routes. The group initially invested around 1,200 to 1,600 pounds – the equivalent of about 317,000 to 423,000 pounds, or roughly 416,000 to 555,000 dollars, today.

When Did the Pilgrims Arrive in America?

Blinded by the prospect of infinite profit, investors failed to account for the difficulties that lie ahead in establishing a prosperous settlement in what was largely an unknown country to the British, just having established the first colony in 1607. The Pilgrims would have to ensure their survival by exploring their surroundings, building shelter, and growing sustainable crops before they could send excess goods back home to be sold for profit.

How Many Pilgrims Died the First Winter?

The first years of the Plymouth colony were brutal: Of the one-hundred and two pilgrims that boarded the Mayflower in 1620, nearly half died during the first winter. Many of the passengers remained cramped onboard the ship for several months after arrival for lack of shelter, with dwindling provisions and succumbing to diseases such as scurvy. By the following fall season, only fifty-three Pilgrims were left to celebrate the harvest festival Americans have come to recognize as the first Thanksgiving.

Though the Plymouth colonists were able to establish flourishing trades in fur, lumber, and whale oil within their New Economics structure, they still required more capital to keep their nascent colony afloat – especially as more settlers began to arrive, sent by the Merchant Adventurers and with little to contribute in the way of provisions.

Their debt continued to mount (can you relate?). And with no hope of paying their investors, the governor of Plymouth colony and a handful of others agreed to buy the merchant’s shares for 1,800 pounds – nearly half a million today, to be paid in installments of two-hundred pounds over nine years.

The colonists were the first Americans burdened by the bondage of debt – unfortunately a way of life that persists to this day. We may not have to brave the wilderness, hunt and grow our own food, or fight a life-and-death struggle for survival, but Americans are still taking on massive amounts of debt to cover the necessities.

Americans owe nearly $784 billion to credit card companies alone, while individual households owe an average of $17,000 – an amount equal to nearly one-third the median household income. Just as our ancestors, modern Americans are increasingly beholden to their creditors.

But here’s something to be thankful for: If you’re struggling to pay off your credit card debt, New Era Debt Solutions may be able to provide you relief. We’re a debt settlement company that helps people dramatically reduce their debt obligation and become debt free.

To see if debt settlement is the right option for you, please contact us or fill out our form on this page for your free debt analysis.