Home » The Difference Between Good Debt and Bad Debt

The Difference Between Good Debt and Bad Debt 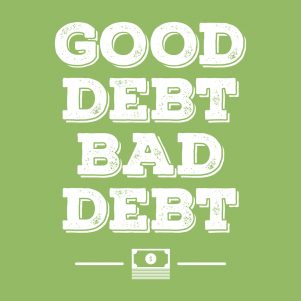 What’s the difference between good debt and bad debt?

Before we go any further, let’s acknowledge the age-old questions, “Is there ever such a thing as good debt?” and “What could possibly be good about owing money or having financial obligations hang over your head at every waking moment?”

While some financial experts claim there’s no such thing as good debt, others disagree, and it usually stems from an investment designed to make you money. A home mortgage is an example of good debt; a house can often escalate in value, earning you income so you can move on to something better.

Other examples include student loans. Getting an education, a degree, and eventually a job in your field of choice is considered by many analysts to be a solid investment, though economic repercussions have caused some to change their minds.

Young people have entered an age where college degrees no longer have the same power. Students sign their names over to banks and take out money. They study for four years, then emerge when it’s all over owing their lives and souls to lenders while a minimum wage job waits for them in the corner. For some, student loans have crossed the threshold into bad debt…

But the truth remains that college graduates earn well over a million dollars more in their lifetimes than those with only a high school education. Taking out a loan can be uncomfortable, but it still holds benefits in the long run, and continues to wade through the shallow waters of good debt.

Bad debt is not likely to garner profit or rewards, and typically involves items that lose their value very quickly. Buying fancy shoes or clothes and racking up a dozen credit cards to do so is considered a form of bad debt, especially if you can’t pay the entire balance all at once. Granted you’re stuck making payments over the next few months (or even years), you’ll likely spend most of your money on interest, which in certain cases, can run extremely high. When you’ve finally paid off what you owe, you’ve given your lender far more than what the item(s) originally cost.

Things like payday loans and cash advances are often considered the worst kinds of debt. These options charge you unusually high interest rates to keep you paying for as long as humanly possible. Sometimes, interest rates on these loans can run as high as 300 percent! That’s a ridiculously large number for someone who only has until their next paycheck to satisfy the debt in full. Anyone who doesn’t is subject to huge rollover fees and penalties.

Owing money is necessary, sometimes even positive granted its owed for the right things, but it’s important to keep an eye on your spending habits, and if your debt amounts to something you can’t control, the road to recovery can get pretty darn rocky.

If you need help managing all your debts, call New Era Debt Solutions today. Our experts are waiting to help you earn the financial freedom you’ve always deserved. If you’re tired of threatening calls from creditors, reach out to our friendly advisors and get the assistance you require to make all your financial worries finally disappear.