Philadelphia is a bustling metropolis that claims the honor of both the largest city and largest county in the state of Pennsylvania. It ranks as the sixth-largest U.S. city by population, and as one of the oldest since its founding in 1682. Though it may be best known as a treasure trove of rich American history and as the site of many of the United States’ proudest moments (such as the invention of the now-iconic cheesesteak), it has grown to be even more to the people who rely on it. Over the years, the city has been a major hub of cultural and economic progress in the Delaware Valley. The metropolitan area itself sports a GMP (Gross Metropolitan Product) of $490 billion annually and houses the headquarters of five Fortune 1000 companies. Philadelphia has also thrived as a center of learning, with over 80 colleges, universities, and trade schools; including the oldest university in the country, the University of Pennsylvania. 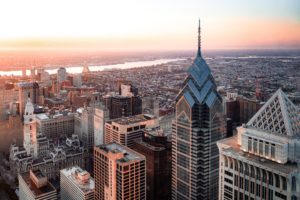 Yet, despite the prosperity it brings to some, there are many who do not enjoy the benefits of the regional cash flow. According to the United States Census Bureau, a massive 25.8% of the population of Philadelphia lives below the poverty line, almost double the national average of 13.1%. Most of those in poverty are between the ages of 18 to 34 and may find it difficult to afford a higher education. This disparity can quickly become a concern for those trying to make a living in the city itself. The median annual income of households in Philadelphia for 2017 was only $46,116, a good deal less than both the median income across the entire United States ($61,937 annually) and the median income in the state of Pennsylvania ($56,907 annually). Even worse, a story published by The Philadelphia Inquirer in March of 2020 shed light on the fact that, adjusted for inflation, Philadelphia has the lowest wage of any major U.S city.

With almost half of Philadelphians renting to the tune of $1000 a month or more, and homeowners paying even more than that, many Philadelphians are barely able to afford cost-of-living expenses. In such a precarious situation, paying even a relatively small minimum payment could push someone’s budget to its limits. Indeed, this may be why the average credit card debt in Pennsylvania is approximately $6,146 per person according to 247wallst.com.

If you find yourself feeling trapped by lingering debt and ballooning interest payments, it may be best to act sooner rather than later and give New Era Debt Solutions a call at 800.527.4421 for a free consultation.

Get A Free Debt Analysis

If you can make minimum monthly payments, you may feel you’re doing the right thing by continuing that same path. But this just may be your worst strategy. As was established before, the average credit card debt in Pennsylvania is $6,146.00 per person. This means that, at a 20% interest rate, credit card debt is costing the average consumer $1,229.20 per month, more than the average rent payment or almost a second mortgage payment. “Just paying it” may work for a time, but what happens in the event of an emergency expense? It only takes one missed payment to inflate a simple debt into a more challenging obstacle.

Credit counseling is a debt management program in which you make a single monthly payment to a credit counseling agency. In turn, that agency distributes the money to your creditors on your behalf, ideally at lower interest rates so you can pay off the debt faster. You still end up paying back 100% of your debt plus interest, and also owe the agency a fee for their services. These programs are designed to take 3 to 5 years, but many Philadelphians may find that they have very low completion rates.

With debt consolidation, you take out a larger, low-interest loan and use that money to pay off your higher-interest unsecured loans. This would have you make a single monthly payment that is – in theory – lower than what you were paying for all your credit card and other unsecured loans. The loan itself, however, can be difficult to qualify for. Many lenders require a good credit history, proof of income, some kind of equity to use as collateral (such as home equity), and more. Regarding home equity in particular, it requires owning a home; which is likely not be the situation for many people living with significant debt in Philadelphia. As of 2018, only 53% of housing units in Philadelphia were even owner-occupied to begin with (versus the national average of 63.9%), meaning that most are either renting or living with multiple roommates.

Debt settlement differs from the first two options in that the actual principal balance you owe is negotiated downward. Because you end up owing less, debt settlement is generally a faster and less expensive debt relief option than either debt counseling or debt consolidation and prevents having to file for bankruptcy. This is what New Era Debt Solutions does for you.

For the individual who cannot meet his or her debt obligations, bankruptcy may be inevitable. A formal declaration of bankruptcy stops the creditor collection process, and the debtor no longer owes some or all the unsecured debt. To date, there are over 270 bankruptcy lawyers operating in the city of Philadelphia, which might help demonstrate how common the practice has become. 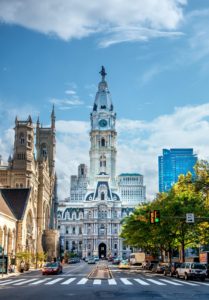 What Is Debt Settlement?

Debt Settlement works by negotiating a payment for less than the principal (balance owed) on your unsecured personal debt accounts. By negotiating on the balance itself, Debt Settlement can provide a much faster means for people living in Philadelphia to pay debts that would otherwise be unmanageable.

Most creditors are willing to accept payments of significantly less than the balance owed to close out an account, rather than lose the entire amount in a bankruptcy proceeding. New Era negotiators are experts at getting the best possible deals from a variety of different creditors.

Click here to see what kinds of accounts can be included in our debt settlement program or call New Era Debt solutions directly at 800.527.4421 for a free consultation.

The majority of debt problems in Philadelphia are likely caused by some combination of loss of income, medical complications, emergency expenses, and sudden divorce or separation. These are legitimate financial hardships that can happen to anyone and can ravage your finances through no fault of your own. If an outside circumstance caused you to fall behind on your payments or caused surprising new expenses, you may have an appropriate financial hardship

Debt Settlement is an aggressive approach to debt relief; and, as such, it presents an occasional challenge. The process requires patience and determination to be free of your financial burdens. Though it is true that debt settlement can be difficult, nothing is more difficult than perpetually hauling around a mountain of debt.  For those who are willing to see it through, debt settlement can get you through your financial difficulties faster and at a lower cost than any other debt-relief options in Philadelphia.

Consumers in Philadelphia can get a FREE analysis of their debt. We will show you how much time and money you can save. Contact New Era Debt Solutions to get started.