Below are brief descriptions of debt relief methods that are commonly used in Wisconsin. Browse through them to get an idea of which type of debt relief may offer the best solution for your situation.

Although it might feel like making minimum payments is helping make some progress toward paying off a debt, it is often the worst strategy in terms of the time and money it takes to pay a debt off. If you can pay more than the minimum, this is almost always better as more of the payment goes into reducing the principal debt balance rather than paying down interest.

With a credit counseling program, a debtor works with a debt management firm to manage their repayment plan while trying to secure lower interest rates in the process. With this type of debt relief program, a single payment is often made to the credit counseling agency who then distributes the funds to creditors on the debtor’s behalf. A majority of these programs are free, but the downsides are that they typically take between 3-5 years to complete and the debtor still ends up paying back all of the principal debt and the interest owed.

Debt consolidation involves taking out a large loan with a low interest rate and then using that capital to pay off other unsecured debts that have higher interest rates. In theory, a debt consolidation plan can leave you making a single and lower monthly payment than what was being paid for before, but these types of loans can be hard to qualify for and if they’re not repaid in the promotional time window, then the interest rate returns to a higher one.

Debt settlement in Wisconsin is a process where the principal debt and the interest rates are reduced in negotiation with creditors. Because a settlement program can reduce the principal debt owed in addition to the interest rates, it can generally be the fastest & least expensive option when compared to debt consolidation or debt counseling, but not all creditors are willing to negotiate.

A formal declaration of bankruptcy puts a halt to the collection process initiated by creditors and a debtor is cleared of some or all of their repayment responsibilities depending on which type of bankruptcy is filed. However, bankruptcy does cause significant damage to a consumer’s ability to borrow money for years afterward, so it is often only used as a last-ditch effort when a debtor has no other options.

See if Debt Settlement is Right for You

How Does the Wisconsin Debt Settlement Process Work?

Debt settlement is a form of debt relief that involves negotiating a repayment deal with creditors. During this process of negotiation, a debt expert can work out lower interest rates in addition to reducing the principal debt balance by up to 50%. This is vastly different from Debt Consolidation or Credit Counseling, which only affects the interest rates and does not reduce the total debt balance like settlement can. With a reduced balance of debt and less interest being applied, debt settlement can offer the potentially quickest and least costly option for attaining freedom from unsecured debts.

This process of negotiating debts down is effective because a majority of credit establishments are willing to accept a reduced payment on the balance owed rather than losing out on the entire amount if the debtor decides to file for bankruptcy instead.

New Era negotiation experts have years of experience working with creditors in Wisconsin, but the offers they’re able to secure don’t last forever. The most successful Wisconsin debt settlement clients are those who are willing to respond immediately.

These lists are not all-encompassing. For more detailed information, contact your Wisconsin debt counselor.

Find the Best Solution for Your Finances

Are your finances burdened by a legitimate hardship condition? 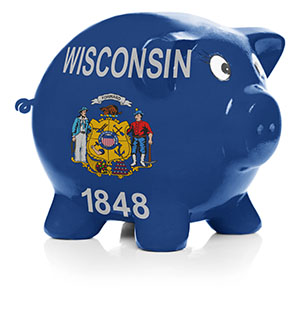 A majority of Wisconsin debtors find themselves in financial trouble due to a sudden loss of income, healthcare costs, or a divorce/separation. Each of these creates a legitimate financial hardship that can happen to nearly anyone at no fault of their own, and each one of these situations creates serious strain on a household budget.

If you’ve found yourself buried in debt that seems like it may be too much to handle and you’d prefer to find an alternative to filing for bankruptcy, then Wisconsin debt settlement could be the form of debt relief you’re looking for.

Are you committed to attaining freedom from your debts?

Debt Settlement is not a “free ride” form of debt relief for people who don’t want to pay their bills. It’s an aggressive approach to that can present an occasional challenge for the debtor. Your level of commitment in sticking with the program, even when there are a few hurdles on the track, is the biggest factor in determining how success the program is. For those who are willing to see it all the way through, debt settlement can get you through your financial difficulties at lightning speed.

Most forms of unsecured debt can be negotiated through settlement such as department store cards, personal credit lines, financing contracts, signature loans, old repossessions, and many other types of miscellaneous bills. However, the biggest discounts with settlement are often obtained from credit card debts; so, if a good deal of your debt comes from credit card accounts, you can often expect good results from enrolling in a debt settlement program.

By asking these 14 important questions, you can pick the good settlement firms from the bad ones right off the bat. It is also always a good idea to check the Better Business Bureau (BBB) to review the company’s overall rating and complaint history in Wisconsin.

New Era Debt Solutions has been helping consumers in Wisconsin clear their debts for over 20 years and has secured an A+ rating with the BBB during our time in the industry. We’ve settled over  $250,000,000 in our clients’ debt and have worked with consumers from different states around the country. If you’d like to learn more, visit our Testimonials page to see what other clients have had to say about their experiences with our programs.

No Upfront Fees. As per an FTC ruling, effective October 27, 2010, debt settlement firms can no longer charge settlement fees until the service has been completed. Not only is this the ethical way to do business, but it’s also the only legal way for debt settlement companies to charge for their services. Those that charge upfront fees are breaking the law.

Consumers in Wisconsin can get a FREE analysis of their debt. We will show you how much time and money you can save. Contact New Era Debt Solutions to get started.