The state of Washington enjoys an unemployment rate of 6.5%, just under the national average of 7%. Washington consumers carry around $5,200 in average credit card debt and hold average credit scores of around 700, both of which are slightly higher than the averages across the United States. When it comes to household income, however, residents of Washington state pull in over $62,000 per year, much more than the national average of $51,000.

Consumers in Washington have a number of protections established by the Fair Debt Collection Practices Act (FDCPA) to prevent agencies from using predatory debt collection strategies.

These limits set forth the maximum amount of time after which a debt has become delinquent that a creditor has to legally collect on that debt. After this limit has passed, a debt will disappear from your credit history. These are the statutes that have been set in Washington state:

How Does Debt Settlement Work in Washington State?

By negotiating a payment for less than the balance due (principal due) on your unsecured personal debt.  This method is different than reducing the interest rate as with Debt Consolidation and Credit Counseling, which do not affect the total debt balance due. Debt collectors also can’t continue to harass you for money owed if you have negotiated to have the debt settled.

Debt Settlement can provide a quicker path of managing your debt in Washington State. Many creditors are open to accept payments that is less than the amount owed in order to collect and close out an account. Instead of losing money on the entire amount of the balance due to a bankruptcy proceeding.

New Era has a team of experts that will negotiate your debt balance in Washington State and have helped thousands of people over the years. Many of the customers that have successfully received a debt settlement in Washington State were the ones that were ready to take immediate action.

Types of debt that can be Settled:

Types of debt that do not qualify:

This list is not exhaustive. Contact your Washington debt counselor for more information about the types of debt that are eligible for settlement.

Review Your Options for Debt Relief in Washington

Below is a brief description of each of those five debt relief methods.

Making only the minimum payments is by far the worst way to pay off a debt. This form of debt relief takes the longest and costs you the most in interest in the long run.

Credit counseling is a debt management program in which you make a single monthly payment to a credit counseling agency which is then distributed amongst creditors on your behalf, ideally with lower interest rates so the debt can be paid off faster. Even with a debt management plan, you still end up paying back 100% of the principal debt and any interest accrued. These types of debt relief programs are designed to take 3 to 5 years and have low rates of completion in the Washington state.

Debt settlement differs from the first two options in that the actual principal balance you owe is negotiated downward. Because you end up owing less, debt settlement is generally a faster and less expensive debt relief option than either debt counseling or debt consolidation. Our team of expert negotiators have years of experience helping clients with debt settlement in Seattle, Spokane, Tacoma, Vancouver, Bellevue and other cities from around the state. 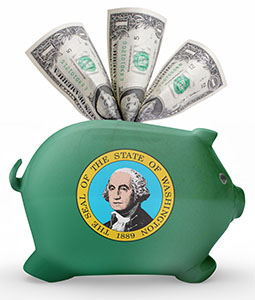 Most debt problems in Washington State are caused by loss of income, medical issues, or divorce / separation. These are legitimate financial hardships that can happen to anyone through no fault of their own, and any one of these situations can wreak havoc on a household budget.

Debt Settlement system is not a “free lunch” for people who don’t feel like paying their bills. If you are over your head due to a hardship circumstance, and you’d prefer to work things out with your creditors rather than declare bankruptcy in Washington State, then Debt Settlement can provide an honest and ethical debt relief alternative.

Are you committed to attaining freedom from your debt?

Debt Settlement is an aggressive approach to debt relief; and, as such, it presents an occasional challenge. Your level of commitment to staying the course, even when the road gets a little bumpy, often determines success. For those who are willing to see it through, debt settlement can get you through your financial difficulties faster and at a lower cost than any other debt relief option in Washington State.

How Can I Find the Right Debt Settlement Company?

New Era has been helping Washington State consumers become debt free since 1999. We’ve settled more than $250,000,000 in debt and worked with thousands of clients. But don’t take our word for it. Visit our Testimonials page to read or listen to our clients’ stories in their own words.

Speak to a debt relief expert at New Era Debt Solutions to learn more about debt settlement in Adams County, Asotin County, Benton County or any other part of Washington state.

What Makes New Era Different from Other Debt Settlement Companies?

No Upfront Fees. A Debt Settlement company should not charge you any fees until or unless they are able to settle your debt. As per an FTC ruling effective October 27, 2010, this is the only legal way to charge fees for debt settlement. You should be suspicious of any settlement firm trying to charge a single penny in upfront fees.

Get Started with Washington Debt Settlement

Consumers in Washington State can get a FREE analysis of their debt. We will show you how much time and money you can save. Contact New Era Debt Solutions to get started.