When it comes to financial stability and economic growth, Minnesota is toward the middle of the pack when compared to other states around the country. Despite having an annual gross domestic product (GDP) of over $351 billion and a median household income of over $65,500, Minnesota residents carry an average credit card debt of nearly $4,600 per person.

The Minnesota state government owes around $100 million less than what it has in assets, leaving a share of $100 for each taxpayer if the surplus was to be divided across all taxpayers residing in the state. This is better than most states across the country, whose governments owe more than what they own in assets which leaves taxpayers with multiple thousands in burden if they were left to repay the debts.

Consider Your Options in Minnesota

Below are some of the most common debt relief options used in Minnesota. Read through these options to get an idea of which forms of debt relief might work the best for your finances.

1. Pay Only the Minimum Every Month

Paying only the minimum is often the worst strategy you can employ if you want to be free from your debt quickly as these types of monthly payments are designed to siphon as much interest out of a debtor as possible. By making the lowest accepted payment, you are paying mostly into interest and extending the time it takes to pay off a debt drastically. If you can afford to avoid it, we would never recommend only making minimum monthly payments to off a debt.

Credit counseling programs are designed to give debtors free advice & strategies on how to reduce their debt load. Many of them involve making a single monthly payment to the debt management agency who then distributes the funds to creditors on the debtor’s behalf, ideally while securing lowered interest rates in the process. With these programs, you still end up paying back all of the principal debt and any interest that has accrued, but the advantage is that many of these counseling programs are offered for free. The downside is that they typically take between 3 to 5 years to complete and few debtors ever fully finish them in Minnesota.

Debt Consolidation relieves debt by combining multiple unsecured debt accounts with higher interest into a single monthly payment with a lower interest rate. This process involves taking out a consolidation loan or credit card and using that money to pay off other debts that have a higher interest rate. Theoretically, debt consolidation leaves you with fewer monthly payments with less to pay each month, but these types of loans can be hard to qualify for and the promotional, low-interest rates that they are often paired with disappear if the loan is not repaid in a timely manner.

Similarly to debt management, consolidation can only affect the interest rates and does not reduce the overall balance of debt that has to be repaid.

Debt settlement is different from both consolidation or counseling in that it can reduce the actual principal balance in addition to the interest rates through negotiation. By negotiating a deal with creditors to repay a reduced balance to settle the debt, debt settlement can be the potentially quickest and least expensive debt relief program when compared to debt management or consolidation.

5. Filing for Bankruptcy in Minnesota

Bankruptcy should be considered as the last-ditch effort for clearing unsecured debts from your name. A formal declaration of Chapter 7 or Chapter 13 bankruptcy puts a halt to the creditor collection process in Minnesota, and the debtor is cleared of some or all of their unsecured debts, but they will likely lose most of their assets in the process and will not be able to borrow for years afterward.

For those with debts from credit establishments that are no longer willing to negotiate a settlement deal, bankruptcy can be a viable option for relieving the debt load.

Learn About the Process of Settling Debts

How Are Debts Negotiated Down in Minnesota?

Debt settlement is a process of negotiating with creditors to offer a reduced payment on the debt owed. This is vastly different from simply reducing the interest rate as seen with credit counseling or debt consolidation programs which do not affect the total balance of debt.

Why are creditors willing to accept less than what they are owed? Because this is a better alternative to receiving no payment if the debtor decides to file for bankruptcy instead of trying to repay the debt. The more a creditor believes that a debtor will file for bankruptcy, the more likely they are to accept a massively reduced payment to settle the debt. This opens the door for negotiations to reduce the overall debt balance by up to 50% in some cases, leaving the debtor with a massively reduced debt load to repay and a lower rate at which the interest is accruing.

Types of Debts That Qualify for Settlement:

This list is not exhaustive. Be sure to check with your Minnesota debt counselor. 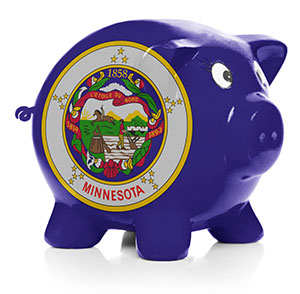 The most common causes of debt problems in Minnesota are sudden medical issues, a loss in income, or divorce / separation. These are legitimate financial hardships that can destroy a household budget on a whim and can arise at no fault of the debtor.

If you’ve found yourself buried under an immense level of debt and you’re looking for a better alternative to bankruptcy, then Debt Settlement can provide an honest and ethical debt relief alternative.

Debt Settlement is an aggressive approach to debt relief, and as such, it can present an occasional challenge for debtors. It is not a “free lunch” system for people who want to avoid repaying their debts. Your ability to stay the course, even when things get tough, is often the most important factor in a debt settlement program. For those who are willing to see it through to the end, a debt settlement program can get you back to even faster than nearly any other form of debt relief in Minnesota can.

Personal credit lines, department store cards, deficiencies in repossessions, signature loans,  financing contracts, miscellaneous bills & more. But, the biggest discounts in settlement tend to come from credit card debt balances. So, if a good portion of your debt load is from credit card balances, you can anticipate a good outcome by taking part in a debt settlement program.

How Do I Know New Era is Trustworthy?

If you’re looking to pick the good settlement firms from the bad ones, start by asking these 14 important questions. Then, we always recommend taking a look at the company’s rating and complaint history with the Better Business Bureau (BBB) for consumers in Minnesota.

New Era Debt Solutions has been helping Minnesota consumers become debt free since 1999 and has an A+ rating with the BBB. Our expert debt negotiators have settled over $250,000,000 in debt and worked with thousands of clients from states across the U.S. But don’t just take our word for it; visit our Testimonials page to see what past clients have had to say about our services.

Experience. With the crash of the sub-prime mortgage industry in Minnesota many new debt settlement companies headed by prior mortgage industry people suddenly popped up. These companies do not have nearly the experience or the relationships that lead to your best settlement deals. Look for companies who have been around long enough to amass a solid settlement track record. For example, New Era has been settling debts since 1999, and we’ve settled more than $250,000,000 in debt for our clients.

Get Started on the Road Back to Financial Freedom

New Era negotiators are experts at landing some of the best settlement deals in Minnesota, but the offers they find don’t last forever. The most successful Minnesota debt settlement clients are the ones who are ready and willing to get started immediately.