Home » 9 tips to save money on food, from the woman who wrote the book on eating for $4 a day

9 tips to save money on food, from the woman who wrote the book on eating for $4 a day 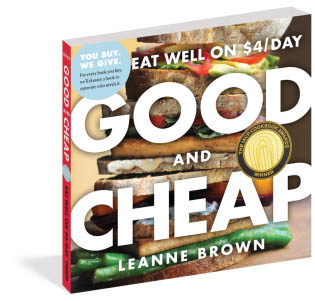 Leanne Brown wrote the book on eating well for less.

Her cookbook, “Good and Cheap: Eat Well on $4 a Day” has been downloaded more than 900,000 times, and over 71,000 updated hard copies have been given or sold at a discount to help people in need. For each copy of her New York Times bestseller sold, a copy is donated to people who might not otherwise have access.

Brown originally wrote the book as the thesis project for her Master’s degree in food studies at New York University. She intended it to be a resource for Americans who receive SNAP benefits — Supplemental Nutrition Assistance Program — which is the official name for the federal government assistance program often known as food stamps. Under SNAP, recipients are given an average of $4 per person, per day to spend on food.

“I was really interested in the SNAP program for a lot of reasons,” Brown tells Business Insider. “I was born and raised in Edmonton, Alberta, and we don’t have food stamps in Canada. That really struck me: There are only 35 million people in all of Canada, so it’s the entire population of Canada, plus 11 million people, living on $4 a day. There’s this whole hidden problem, because it’s so difficult to eat on so little.”

Brown says her cookbook, which features many of her own favorite, go-to recipes, isn’t only for people living on extremely limited budgets, and isn’t meant to encourage people to drastically restrict their food spending. Rather, she explains, it’s a resource to show that anyone can make healthful, varied meals without spending excessively.

Below, take a look at nine of the tips Brown shares in “Good and Cheap” for saving money on food.